In "Terrortories: The Frontier," artist Jamison Chas Banks held both a performance and open studio as a culmination of several months’ art residency in the Museum of Contemporary Native Arts in Santa Fe. Banks (Seneca-Cayuga-Cherokee) explores the aesthetics of nationalism and military totalitarianism—pushing it to such an extreme that it becomes absurd. Much in the manner of Slovenian artist collective Neue Slowenische Kunst, Banks repurposes imagery from diverse governmental institutions from all over the globe to demonstrate the universality, and futility, of conflict; however, in this performance, he and his collaborators, Daniel Grignon (UNsurgent) and Echota Killsnight (U.N. Envoy/Guard), resolved their conflict by signing a peace treaty, sharing peace medals, shooting a deerhide slingshot that showers the studio with hair—“a blessing” as Banks described it. Sadly, I missed the performance; however, the aftermath was still performative, people enjoying celebratory slices of white cake emblazoned with the United Nations’ logo, while visitors wandered in and plied the artists with questions. 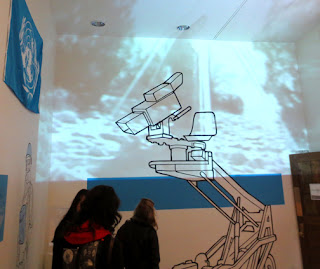 Banks is the printing instructor at the Institute of American Indian Arts, and his focus is serigraphy—creating multiple hand pulled prints that walk the line between propaganda and show poster. He has a flair for creating all encompassing environments with multiple layers and dimensions of art creation. In this installation, Banks had painted huge wall murals, overlaid with his videos. He displayed “artifacts”—knives, books—in cases, suggesting trophies of war. Prints and paintings of terrorists, such as Saddam Hussein were accompanied by Arabic music. Meanwhile Banks, Grignon, and Killsnight sat at their command post, a desk with obsolete radios and telephones, dressed in a pastiche of uniforms.

Banks and his collaborator represented “blue” and “red” forces—generic enemies that could be applied to war, sports, gangs, corporate raiders, politics, Coke/Pepsi, or simply human nature. While much of his imagery and material reference warfare and conflict directly, they also reflect the romanticized, patriotic view of warfare portrayed in movies, television, and novels—the mediated, heavily censored, and patriotic means that many of us civilizations experience war, which is so far removed from the horrors of those that directly experience conflict.

Posted by firstamericanart at 11:15 AM